UT-Austin Researchers Focus on Poliovirus and The Human Immune Response

Dr. Greg Ippolito and his colleagues at UT-Austin, Drs. George Georgiou, Andy Ellington, and Edward Marcotte, have developed a set of cutting-edge technologies being used to analyze the human immune response to vaccination or infection. Their unique methods are helping to gain fresh insights by directly comparing protein-level serum antibody characteristics to DNA-level information in blood B-cells. Two key technologies, BCR-Seq and Ig-Seq, are used in concert to gather immune response data that is then subjected to

1. BCR-Seq: Short for “B-cell repertoire sequencing,” this technology allows for analysis of a patient’s immune response at the single-cell level by analyzing the antibody information presented on the surface of the many thousands of individual B-cells produced in response to vaccination or infection.

2. Ig-Seq: Short for “Immunoglobulin sequencing,” this second technology is a proteomic/informatics strategy that, when combined with BCR-seq data, enables determination of molecular-level identification and functionality of the most prevalent immune response antibody proteins (immunoglobulins) in blood or other fluids. 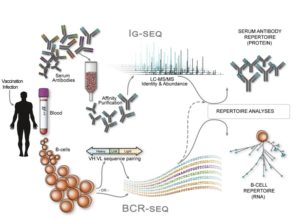 3. Bioinformatic analysis: A highly complex set of statistical and computational methods are used to analyze BCR-seq and Ig-Seq data. This enables researchers to identify specific factors that impart immunological protection against disease.

Polio vaccine improvement: An important last step in the global eradication of polio will be to universally end the use of the oral vaccine (OPV), which can mutate to become other forms of poliovirus called “pathogenic circulating vaccine-derived polioviruses (cVDPVs).” These strains are able to spread among populations with insufficient levels of immunity. Thus, a final transition back to the original Salk vaccine is required. Ippolito and colleagues Ig-Seq work with the Salk vaccine has already resulted in the discovery of agents that could be used therapeutically in the case of cVDPV outbreaks.

Poliovirus eradication may make way for others: While our understanding of the human immune response to poliovirus is an important step toward its eradication and the development of new vaccines and diagnostics, Dr. Ippolito emphasizes that a word of caution is in order. Mounting evidence shows that even as the poliovirus reaches near obsolescence, the geographical ranges of emerging viruses, such as Enterovirus 71 (EV-71) and Coxsackievirus A16, are steadily expanding to fill the niche vacated by poliovirus. Evidence of this has been seen in South Asia as occurrence of epidemic cycles of polio-like syndromes of permanent paralysis and even sudden death among young children.

For a more in-depth look at the research behind this amazing work: